Additional Championship Dinner tickets for friends and family members can be purchased at the Race Office (at 20€ each). 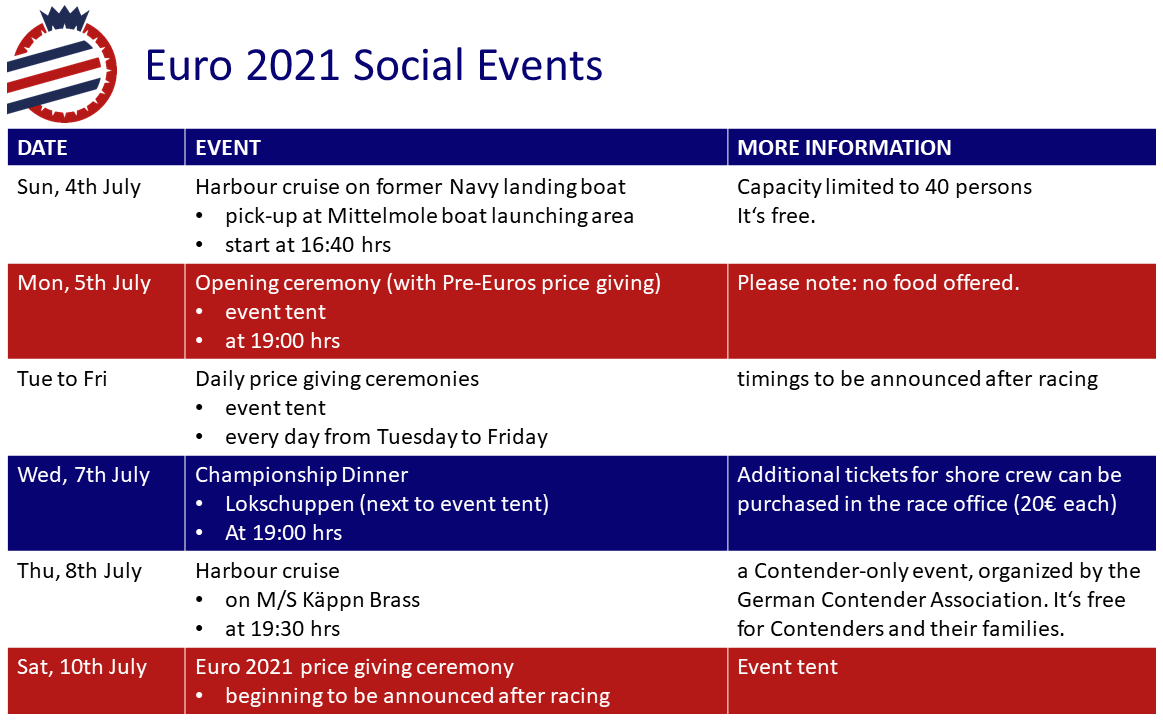 Following the update by Søren Dulong Andreasen on the situation of our Danish friends, a few pieces of information from Germany, notably on the major events German nationals and World Championships.

The Open German Nationals on Lake Constance will not be held in May but from 17 to 19 September. We have taken the decision to postpone for obvious reasons. As we hope for a strong participation by our Italian, Swiss and Austrian friends, we also believe that the new autumn date bears better chances for international travel and a panalpine gettogether.

The World Championship in Warnemünde is still planned for the first week of July. The draft NoR draft has been reviewed by us and should be published soon. Warnemünde is going to follow the hygiene protocol successfully tested by Kiel Week last year, which means a heavy focus on the water side of things.

There is three main questions associated to the Worlds at the moment: 1) Can an international sports event take place in Warnemünde?, 2) can you guys travel at all or without having to accept unacceptable burden?, 3) what will it be called?

To be quite honest with you, I can't respond to any of these three at the moment. While question 3) depends on 1) and 2) and will eventually have to be decided by ICA, I can tell you that what keeps us optimistic is that the city of Rostock (of which Warnemünde is a part) and its Danish mayor did an outstanding job so far at containing the pandemic while allowing for relatively much public life. So if there is place to race in Germany in July, it is probably Warnemünde.

As of now, we continue to set up a race, hoping that many of you can come. There is no reason to cancel the event prematurely, even less so as the list of races in Europe already starts getting shorter and shorter again.

I promise we will keep you updated.

After Max' win in Quiberon and the cancellation of the 2020 event, the German Contender Association is even more excited to host the 50th Contender Worlds in 2021. The Championship will take place in Warnemünde from 4 to 10 July 2021 with a Pre-Worlds event from 2 to 3 July 2021. (The Pre-Worlds will not be the German Nationals 2021.)